APOOO and JENNIFER, I WILL ALWAYS LOVE YOU...
Title: Love’s Politics by Angelia Vernon Menchan

The gang from Center City is back and hotter than ever. Scandal after scandal, drama after drama, unfolds on the pages of Angelia Vernon Menchan’s newest release, Love’s Politics. When we last encountered Cinnamon and Malcolm they were embarking on a new journey of love and comforting embrace of friends and family. Like all of her other books, Mrs. Menchan’s value of friendship can be seen throughout the book.


When Cinnamon and Malcolm return early from a special trip, they return to a buzz around the city. A petition has circulated and been signed by the Center City citizens. They want Malcolm Black to be the man in charge; the next mayor. However, when running for any kind of political office, skeletons always seem to find their way to the surface and into the light for all to see. Cinnamon being the wise woman she is, thought she would cut off the nonsense before it got started, but she never imagined the gloves would come off of a person she cared about. How far will people go in order to screw up Malcolm’s campaign? Will he decide it is better to withdraw than to put his family out there for the vultures to pick apart?


I read Love’s Politics in mere hours. I had to ask Mrs. Menchan would she ever write a book that I do not devour so quickly. Her answer was simply “I hope not.” I, too, hope not. The characters are wonderfully developed and they make mistakes like regular everyday people. They also know how to own up and deal with the consequences of their actions. People could learn from these characters. Someone asked me if the book I was reading was a romance. I told them no, it is a story about relationships. I recommend Love’s Politics to readers of contemporary fiction revolving around relationships with an added bonus of scandal and drama.


The author provided an uncorrected proof for review purposes.


Posted by Angelia Vernon Menchan at 11:59 AM 4 comments: 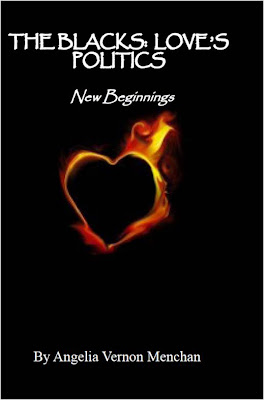 Posted by Angelia Vernon Menchan at 5:48 AM No comments: