THE CONSTANT TOWER BY CAROLE MCDONNELL 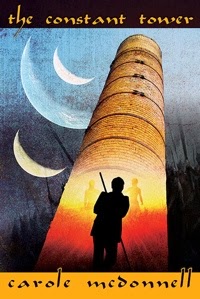 The Constant Tower by Carole McDonnell

Description
Sickly fifteen year old Prince Psal, the son of the nature-blessed warrior-king Nahas, should have been named Crown Prince of all Wheel Clan lands. A priest-physician like his friend Ephan, Psal lacks a warrior’s heart, yet he desires to earn Nahas’s respect and become a clan chief. If he cannot do this, he must escape his clan altogether. But his love for Cassia, the daughter of his father’s enemy, and his own weaknesses work against him. When war comes, Psal defends Ktwala and her daughter Mahari, wronged by Nahas, and speaks out against the atrocities his clan commits, further jeopardizing his future. And now the mysterious towers that keep humans safe from the Creator’s ancient curse are rebelling. A prophecy exists—not that Psal believes such matters—of three great ones who will find the Constant Tower and break the power of the third moon. Could Psal, Ephan, and Mahari be those great ones? Psal must risk losing his father’s respect to find his destiny, and with his friends face the dangers of the unmaking night to find the Constant Tower and save all of humanity.

What others are saying
“Carole McDonnell is a first-class world-builder. A unique, powerhouse epic, The Constant Towers is a treasure trove of great characters, compelling cultural details and political machinations, all lovingly detailed in evocative prose. Yay!”—Stefan Petrucha, author Dead Mann Walking
“I think this may be an important book. This certainly a well-written book, full of detail and observation and metaphor.…I had sympathy for four or five of the characters in this long book filled with thousands of people. I had empathy for absolutely none. I hated the evil society depicted and I disliked most of the characters. Their thinking was so orthogonal to mine that it hurt to try to understand the characters.…Part of what reading novels are supposed to do for us is help us understand how others think and gain more supple minds. I flunked this lesson.…my tribe also strongly believes that there are certain things you DO NOT talk about in public. I squirmed through the sex scenes.…you may be wondering why I gave this book five stars when there was so much in it I disliked. I gave it five stars because it is a great book.…It’s possible that if I would just admit that I’m as big a sinner as the sinners in this book, that the core of the book would crack open for me and the Constant Tower would welcome me and heal me.”—Lelia Rose Foreman, Amazon review

Other formats
Kindle
Nook
Posted by Angelia Vernon Menchan at 10:31 AM No comments: