Join me in welcoming the very prolific and busy, Deatri King-Bey to RAMBLINGS. Deatri is a multi-genre author and developmental editor who still finds time to encourage and mentor other authors. She is also the founder of many online reading commnunities, including Facebook's BLACK ROMANCE AND WOMEN'S FICTION BOOK CLUB! Welcome Deatri! 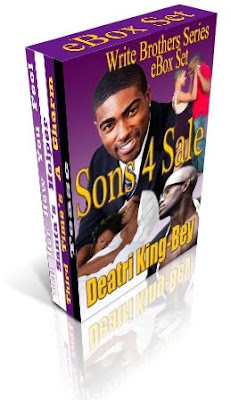 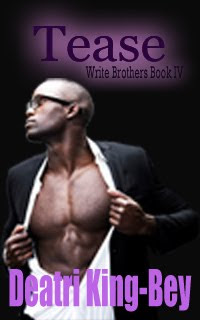 A year ago, I released the first book in my traditional romance series, The Write Brothers. I write romance, so you probably think that’s no big deal. Yes, I write romance, but not traditional romance or series romance. I love to read traditional romance series, and admire authors who can knock out series after series. How they remember all of those characters and plot lines is beyond me! I’ve been told to write what you love to read a few million times, but stayed away from doing a traditional romance series. Why? Believe it or not, writing romance is a challenge for me. There are so many rules that coming up with an original story that will be exciting enough to keep the audience yet still fit the mold is difficult. I love a challenge, so romance is right up my alley. Before the Write Brothers series, I dabbled with a traditional romance or two (Diamond in the Rough, Trapped In Paradise), but this time I would go all out. This would take at least a year to complete, but I was ready to take on this new challenge. So there I was, a year ago, wondering if this series would flop. I pushed my fears aside. I loved this fictional family and prayed the readers would also. Then it happened, my inbox started filling with comments such as—Oh my GOD! Gloria is crazy! Gloria is the mother of the brothers, and a HOOT. I was on my way. Character after character, readers wrote to show their support and ask for more. I even allowed readers to decide what order I wrote the titles in. So here I am, a year later, and the final title in the Write Brothers series just dropped. With each novel, I had to improve. Could it be done. From what I’m told, I pulled it off. Judge for yourself. Below is information on Tease, the final novel in the Write Brothers series and Sons 4 Sale, the ebox set of the entire series. Let me know what you think when you finish. TEASE: After Eva caught her fiancé in bed with her cousin, she swore she'd never be played for the fool again. Now the ultimate bed-hopper—Tyler Write, has set his sights on her and she’s having difficulty resisting him. Tyler can have any woman except the one he truly wants—Eva Simpson. Smooth lines and sweet talk won't work with her. To have a chance at Eva’s heart, he’ll have to show her who he really is. Purchase this eBook from Amazon, Barnes & Noble. The print version will be released in a few weeks. SONS 4 SALE (Write Brothers Series eBox Set): If Gloria Write hears “There are no good Black men…” one more time, she’ll scream. She has four sons who fit the bill and not one is married. Desperate times call for desperate action. During the course of four novels, Gloria sets out to ensure her sons marry. The eBox set includes all four Write Brother novels. Purchase the eBox set for $7.99 or each novel for $2.99 from Amazon or Barnes & Noble. Angelia, I can’t thank you enough for allowing me to visit your slice of the cyberworld. I appreciate it and you. Deatri King-Bey http://DeatriKingBey.com, http://www.LLReaper.net
Posted by Angelia Vernon Menchan at 4:33 AM 9 comments: