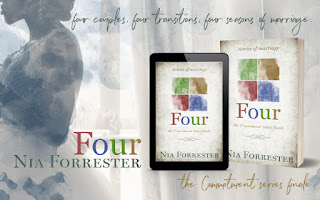 Grace
Most couples wouldn’t have weathered one mistake of the kind Shawn made when he and Riley first got married, let alone emerge with a commitment that’s stronger, a beautiful family and a love that’s even deeper. Is there any way their relationship can survive mistake number two?

Balance
Whatever Brendan wants, Brendan gets. It’s an arrangement Tracy doesn’t mind, because he provides everything she needs: love, financial security and the comfort of never having to work outside the home. But now, the most important thing she wants, he doesn’t have the time—or maybe even the will—to give. With a relationship built on giving all of herself, is it fair to now ask for a piece back?

Growth
Robyn’s career is in a growth-spurt just as Chris’ seems to be at its natural end. No longer empire-building, he’s struggling with his new reality, and the need for a sense of purpose separate from his work. His wife seems way too busy to notice. That is, until someone else does.

Renewal
Once a mistress, now just a suburban wife and working mother, Keisha doesn’t recognize herself most days. The problem is, Jayson doesn’t either. If he’s reading her right, she wants out. And unless she’s mistaken, he might not mind too much if she decided to go.

Nia Forrester lives and writes in Philadelphia, PA where, by day, she is an attorney working on public policy and by night, she crafts woman-centered fiction that examines the complexities of life, love and the human condition. She welcomes feedback and email from her readers at authorniaforrester@gmail.com or tweets @NiaForrester.